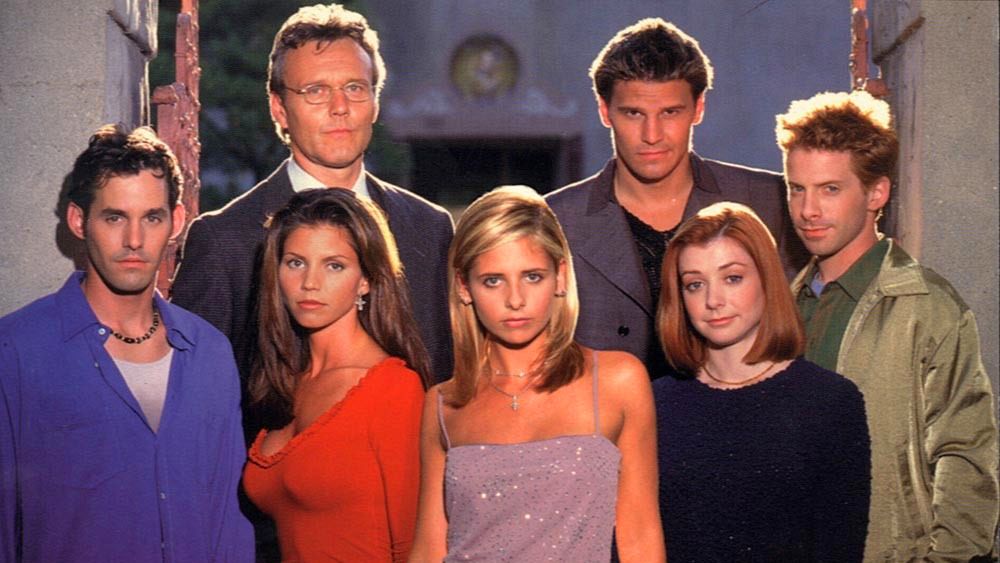 Having finally gotten home for Christmas break, and celebrating my birthday, I decided to take a break from writing about music and indulge by writing about one of my favorite TV shows of all time! So let’s take a look at my ranking of every season of Joss Wheadon’s seminal masterpiece, Buffy the Vampire Slayer!

7. Season 4 – Few fans of the show will disagree with me on this one. The sequences featuring the first slayer were fascinating, the final battle was quite impressive in scale, and the introduction of one of television’s first openly gay characters was quite a step forward. On the other hand, the season lacked direction, spinning it’s wheels for quite a few episodes before finding traction with an interesting villain in The Initiative, only to use them to create the season’s main villain, Adam.

On top of all of that, Riley was poor stand in for Angel as a love interest and while Spike’s second iteration as the show’s comic relief was enjoyable, this season still failed to dig into the depths of the character’s appeal.

6. Season 1 – While the 1997 half-season started it all, it is far from perfect. The pilot trilogy was incredible and the final battle with an excellent villain was quite satisfying. What this season lacked in budget, it more than made up for in heart and acting talent.

That being said, the season meandered a bit too much for it’s length, and a large swathe of time was waisted on creating a “chosen one” villain who was played quite poorly by a child actor and eventually amounted to nothing. Of course, watching a personified puppet hunt demons alongside a super powered high school cheerleader is just irresistible.

5. Season 2 – This season really set the bar for what this show could be, choosing to ditch the chosen child from the last season and instead introduce the world to the evil form of David Boreanaz’s Angel. An antagonist created by Buffy’s own choices teaming with a lovably anarchic Spike and his mentally unstable lover, Drusilla, created a trio which was a formidable opponent to the, by now, lovable Scooby gang.

On the other hand, the finale was somewhat anticlimactic, and a few of the secondary characters went a bit underdeveloped. The season also left a bit to be desired in it’s one off episodes, sporting few memorable moments outside of those which served the plot.

4. Season 7 – For many, this is a favorite season, and I see why. The final battle, which takes place IN HELL is breathtaking, the idea of training the lines of new slayers was very entertaining, and Whedon’s choice to turn hard into the slayer mythos made for a great conclusion to one of the best shows in TV history. By far the best aspect of the season is getting to see the closing act of James Marsters’ Spike as he learns to cope with his soul and gives his life to win the final battle, bringing down the entire city in the process.

The weakest bit of this season can be chalked up to budgetary short comings. The epic finale, especially, is quite dated. While this is the case for the show as a whole, it stands out in the final season as 2003 was the year which saw the release of master works like Lord of the Rings, leaving the production staff with no excuse for the poor quality of the effects.

3. Season 3 – The first of the two epic would-be conclusions to the series before it’s true 2003 finale, the third season took the bar set by season two and raised it ten notches. The Mayor was arguably the best villain throughout the show’s run, and the addition of Faith as a second slayer, acted and written to perfection, pushed Buffy’s character to new heights. The closing chapter of the love story with Angel, spawning an impressive spin-off series, as well as Willow and Xander’s intertwining love triangles were welcome additions to the already full lineup of arcs in this season.

The highlight of the entire high school era came in the final battle, when the show ditched the expectation of seeing Buffy come face to face with the season’s antagonist. Instead we see an all out war between the graduating class, lead by the slayer, and a small army of vampires lead by a giant snake-demon. What’s not to love?

2. Season 6 – This has always been my personal favorite season, and is the general the favorite of most long time fans. Since the writers didn’t know beforehand that there would be a sixth season, they were now saddled with not only reviving their title character (I warned about the spoilers) but creating storylines from a vacuum with little lead up to go on. What they came up with was a masterpiece of a character study, virtually redefining every main character by stretching them to their boundaries.

Buffy, in particular, is perfect this season. Using her death and resurrection as a centerpiece as well as a form of meta-commentary on the show’s resurrection after leaving Fox, Wheadon takes the opportunity he’s been afforded and creates a very human story, building upon the success found in season five with making Spike a more sympathetic and human character. Above all, Xander’s final speech to Willow to stop her from destroying the world is gorgeous. If you don’t cry, you simply don’t have a heart. And of course, this season sports the greatest musical episode of all time!

1. Season 5 – Perfect. The only way to describe this season is perfect. At the time of writing, this was meant to be the final installment, and the writers waisted absolutely no time. A fantastic villain was introduced in the opening episodes of the season, along with a sister for Buffy through possibly the best retcon in history. The death of Joyce Summers is powerfully written and incredibly moving.

Whedon fleshes out characters in a fascinating way, and it’s on full display this season. He takes the show’s title character, and simply tortures her. Her relationship breaks down, her mother dies, her friends turn on her, and a literal god comes to destroy her, but she’s able to handle it all. In a show about friendship, Whedon takes a would-be final season to show the power of one single woman, and he does it perfectly. That’s why Buffy the Vampire Slayer will forever be my favorite television show of all time.