For those of you well versed in indie/odd music, this will seem like a safe and obvious choice, but the four piece, English Indie-rock outfit, named after the keyboard command which produces the triangle symbol, rose to fame on the power of their single, “Breezeblocks.” It was a funky, experimental track that is somehow about murder, love, and the children’s book, “Where the Wild Things Are” all simultaneously.

Their discography, while sporting only 3 studio efforts, is high quality throughout. 2012’s “An Awesome Wave” is the highlight as well as their debut, but their career is still going strong with a recent release in 2017 keeping them in the discussion. Alt-J isn’t the most successful band in the world, nor the strangest, but they strike a balance between the two which is quite admirable.

4. Walter Mitty and His Makeshift Orchestra

Witty lyrics, hand-drawn album covers, and an instrumental pallet which ranges from the standard, acoustic guitar to the fantastic kazoo work that decorates the majority of their most memorable tracks. These qualities, and many more, draw listeners, particularly those with an ear for the strange, immediately to this band. You’ll stay, however, for the genuinely high quality music that fills fantastic records like 2013’s Overwhelmed and Underdressed.

While the Makeshift Orchestra haven’t found massive success, they have accrued a strong following inside of the larger, quirky-folk genre. Their performances are fun and upbeat, and their ability to keep from taking themselves too seriously allows for a lighthearted feel that can almost make you forget how actually great this music is!

Similar to Walter Mitty, Sledding With Tigers is a quirky folk group with unique instrumentation, diverse vocal styles, and a punk-influenced spirit which really shines through in ever project. Unlike many of their short-lived contemporary’s, Sledding with Tigers boasts quite the discography, spanning six years and four projects.

If you have heard of Sledding with Tigers, you’ve likely heard of their 2015 EP, Come On and Slam, which became a bit of an underground classic. The EP follows the story of 1996 sports film, Space Jam, often sampling clips and using quotes and actors names as key points in many of the tracks. In a way, the record is simply a well received joke, but on the other hand, Sledding with Tigers shows the art of songwriting by creating tracks based on a common background, which is quite enjoyable.

This experimental hip-hop duo has seen a massive growth in fanbase since their modestly received 2012 LP, “No Love Deep Web,” a record noted as much for its revolutionary style as for the remarkably vulgar album art. Much of this growth can be attributed to the groups deep connection to the modern internet/meme culture which resonates well with modern youth. Another large chunk of their popularity is likely born of the fanfare of many YouTube critics, most notably Anthony Fantano.

Above all, however, Death Grips’ growth has been shockingly organic. They give very few live performances and have an odd and often non existent social media presence. The seems to care very little about the size or dedication of their fanbase, but they certainly care about beefing up their discography, releasing roughly an album or two per year. The angry rapping of MC Ride melds well with the open, hard-hitting instrumentation of his counter part, Zach Hill. Together, they form a truly unique sound which is worth a listen for any fan of hard-hitting hip-hop.

KEY TRACKS: Guillotine,  Get Got

Have you ever heard a concept album about harmonizing, immortal, robots learning about love, friendship, and themselves all while traveling across the American Frontier? If your answer was no, then have I got a band for you. 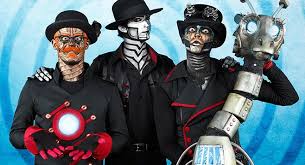 Steam Powered Giraffe got their start as street performers who played singing and miming robots, before their music career took off with their 2009 debut, Album One. They were then noted for their strange covers of artists like Rihanna, as well as their major single, “Brass Goggles,” but their career truly took off after the release of “Honeybee,” from their second studio record which served as their most successful single to date.

SPG’s musical stylings are fascinating. Much of their sound stems from the early work of groups like The Beatles or The Beach Boys, relying, instrumentally on a prevalent acoustic guitar played by bass singer David Bennet, AKA “The Spine” Their sound also evolves rapidly as the band’s lineup evolves. David Bennet and Isabella Bennet, AKA “Rabbit,” have been constant members throughout, but have seen about a dozen other members come and go, some as session performers and others playing characters. What has not changed, however, is the perfectly tight, and unbelievably complex harmonies that take center stage on nearly every SPG track. This is a band that shows real dedication to their craft, creating backstory, character arks, and complex concepts for each project on top of music which is incredible in its own right. Because of this dedication, Steam Powered Giraffe lands at the very top of my list of odd bands you NEED to hear!