Check out my review for the new Florence and the Machine record, High as Hope. 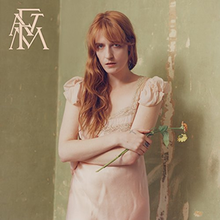 Florence and the Machine is one of the most recognizable names in all of modern rock music. The indie collective, which is currently listed as having nine members, was formed in 2007, and released their debut LP, Lungs, in the summer of the 2009.

Lungs was an explosive hit, going five times platinum, and instantly made the band one of the biggest groups in the world. Their particular blend of experimental, arena rock and soft pop quickly captured the zeitgeist, thanks to the success of Florence, as well as groups like Coldplay, The xx, and Of Monsters and Men.

Florence and the Machine would go on to release Ceremonials in 2011, and How Big, How Blue, How Beautiful in 2015. Each of these were very well received by critics, but suffered somewhat diminishing commercial returns as their sound began to fade from the mainstream. The group had developed a very dedicated fan base, however, and their studio work continued to impress along with infamously impressive live shows. In late June, 2018, Florence released their fourth studio record, High as Hope.

This album is surprisingly quiet, especially considering the large line up of musicians involved. Tracks like “Sky Full of Song,” and “No Choir,” verge on boring because of their simplicity, and would fall into this trap if not for the excellent vocal work of Florence Welch which highlights every song.

Isabella Summers’ piano melodies carry the bulk of this album, especially on slower tracks like the opener, “June,” and the charismatic, “Big God.” Here, Welch’s vocals still take front and center, but Summers slides in behind her with one simple, but catchy piano hook after another.

Not every song, however, is quiet and simple. “South London Forever,” utilizes rhythmic bass drums and a catchy violin groove to stand out early in the tracklist, while “100 Years,” uses sharper percussion and chaotic vocal layers to bob heads near the end.

Vocally, Florence Welch puts on a clinic here. Tracks like “Grace,” and “The End of Love” are melodic and moving in their delivery, which sees Welch’s singing pushed far to the front of the mix as the undeniable lead, while she brings attitude and unique melodic lines with her to “Patricia,” which is far more upbeat and showcases yet another tool in her arsenal.

By far the best track on this record is “Hunger.” It’s lyrically impressive, even more so than the rest of the album, Welch’s vocal melody is endlessly catchy, and the crescendoing instrumental,  broken at the choruses by well timed and well mixed cymbal crashes are almost overwhelming. This is a track that will have listeners humming for a few days after.

High as Hope’s weak points are few and far between, but far from non-existent. Most notably, the pace is too quick. Clocking in at exactly 40 minutes, most of the tracks feel rushed and underdeveloped. The band clearly has the ability it build interesting layers over long form tracks, but choose not to for whatever reason.

“Big God,” is also the weakest showing of the track list, as it is both lyrically and sonically repetitive. At times, a few of the songs tend to blend together, as they all sound similar, and “Big God,” is an example of a track that will completely disappear from memory in a few hours.

In total, High as Hope is an excellent showing for the Indie Rock megastars, and adds yet another solid chapter to their strong discography. The album’s unique mix of baroque instrumentation, expressive lyrics, and powerhouse vocals makes for quite the finished product which can be enjoyed by all listeners, from die-hard fans to newcomers.

With nearly all of the group’s contemporaries having fallen off in terms of popularity, and many scrambling to update their sound, its good to hear a band from the this baroque pop/rock movement hold strong and piece together an album they can and should be proud of.