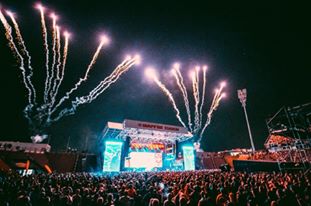 I Bowed On My Knees – The Gaither Vocal Band

This was the first song that I can truly remember loving. I was very young and the only kid my age that I knew who listened to large amounts of Southern gospel music. Nevertheless, I fell in love with this song, and much of that enjoyment still remains today. The powerful tenor lines from David Phelps drive the track along and the excellent instrumental gives the track an epic feel that that is hardly matched, even by the majority of rock epics.

Today, I remain a big fan of the Gaithers and of David Phelps, but especially of this song. I was able to see them live in Saint Louis when I was still very young, and I remember enjoying the concert quite a bit, even if my friends at school weren’t as impressed as I thought they should be. I’ve had plenty of “favorite songs” over the years, but this was the first one to hold that distinction, and for that, it will always hold a special place in my musical history.

Broadripple is Burning – Margot and the Nuclear So & So’s

I was first shown this song by a close friend and I was hooked from my first listen. The vocal talents and lyricism of the band’s lead singer, Richard Edwards, absolutely blew me away. Through quirky one-liners and thoughtful storytelling, Edwards crafts a tale about change, about regret, and about growing up, which was exactly the kind of thing I was ready to hear around my sophomore year of high school when I first heard this song.

Since first hearing it, I’ve become a massive fan of Margot, and later, Richard’s music. I was lucky enough to see him live in Iowa about two years ago, and I’ve heard all of the many versions of this song which I know of. Last year, I was finally able to find the original vinyl print of the single online for a hefty price, and it’s still the prized possession of my record collection. I also stopped, just before leaving town for my sophomore year of college, to tattoo a few of the lyrics on my bicep. This is and always will be one of my favorite songs of all time.

I first came across this track through a video listing the “Top Ten Weird Bands,” or something similar. I heard only a snippet, but it featured fantastically tight harmony and a unique sound. Also, the band members were painted to look like steampunk robots. I was hooked. Steam Powered Giraffe is one of the most unique bands in music today. In addition to their unique, running concept, they feature extremely complex harmonies, for which I have a soft spot, and quirky lyrics

At the time of my finding this song, I’d been dating my girlfriend, now of almost three years, for only about a month. This strange song was one of the first unique things we were able to enjoy together. We were able to see the group live about two hours North of our hometown and it was one of the strangest and most enjoyable concerts I’ve ever seen. I’ve loved this song and band for about three years now and they stand as a constant reminder to give all forms of art a chance, no matter how odd they may seem at first.

Fiddle and The Drum – A Perfect Circle

The first time I heard this song, I was in a strange place in my musical life. I had just started high school, where my teachers were desperately trying to direct my attention away from music and toward more traditional subjects. I was loaded down with math and engineering homework, which made it virtually impossible to find the creative inspiration needed to write music. I had told my dad that I thought I may be done writing music, that I felt like there was only so much that could be done with four chords, and I felt creatively limited by the entire form of music. A few days later, he showed me this.

I was already familiar with Tool, and most of A Perfect Circle’s work, but there was something about this track. The harmonies were reminiscent of the gospel music I’d grown up on, but the tone was so much darker, and Maynard’s vocals told such a story. Above all, however, it was hearing someone totally unhindered by their medium, telling a story that could only be told musically, that reignited my faith in music at a time in my life when I needed that.

Of all the songs ever written, not one has changed my life the way this one has. The first time I heard this, I was young, somewhat interested in music, and riding home in a dark car late at night. My dad told me he thought I’d like the song and to listen. He was right. From this very first listen, I could hear the unbelievable lyricism and vocal performance of Adam Duritz, the vast instrumentals, and above all a story. I had never in my life heard a song with the ability to tell such an effective story. Every line, instrument, and vocal inflection said something, and it was this song that showed me the true power of an amazing song.

Since this first listen, this song has never really made it’s way out of my regular rotation. Counting Crows is, without a doubt, my favorite band to date. About a year ago, I was lucky enough to see them live. My girlfriend and I sat in the second row and even got to meet them for a few minutes before the show. On a larger scale, the bulk of my life is dedicated to music, writing, performing, and reviewing. That is, without a doubt, because of the way I fell in love with this song, and that’s why this is the number one song that changed my life.