Social Cues is yet another well executed and perfectly paced set of jams from one of the most consistent acts in the rock genre. 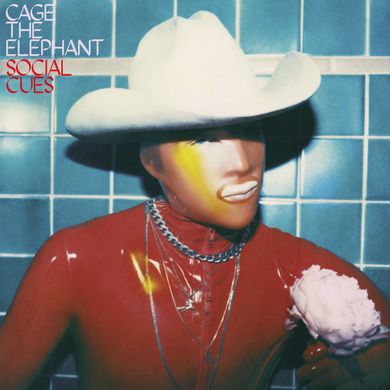 Cage the Elephant is a garage rock band from Bowling Green, Kentucky. Oddly, their first taste of success came in the UK when their 2008 self-titled debut peaked at number 38 on the UK charts thanks to the popularity of their first single, “Ain’t No Rest for the Wicked.” The album went on to achieve platinum certification in the US and their follow up, Thank You, Happy Birthday was able to reach number two on American charts. Perhaps their best known release came with 2013’s Melophobia which allowed the band to showcase their massive range and penchant for ear worm melodies. After the relatively warm reception of Tell Me I’m Pretty, which including a Grammy win Best Rock Album,  for best in 2015, and a few high profile festival performances, fans were clamoring for a fifth release and they got it in Social Cues.

The biggest growth we see on the album comes in Daniel Tichenor’s bass guitar lines. From the opener and best track, “Broken Boy,” to later cuts like “Dance Dance,” the bass is given quite a bit of leeway and brought to the front of the mix in much of the album. Allowing the bass to drive the arrangement in this way gives the record an extremely unique sound in addition to freeing up the guitars to be a bit more creative.

Matt Shultz takes that freedom and runs with it on lead guitar. On a song like “Night Running,” where most bands would come off as hackish for the inclusion of reggae elements, the lead guitar saves transforms the cut into a rather enjoyable piece of the album. “House of Glass,” on the other hand, is an extremely straightforward blues-rock track which benefits immeasurably from bold and creative guitar work across its runtime.

Even more impressive than his work as lead guitarist, however, is Shultz work as the album’s lead vocalist. Songs like the title track or the later “Ready to Let Go,” were absolutely lodged in my mind after the first listen thanks to good performance and even better writing. This is hardly surprising as Cage has written some of the catchiest rock tunes of the last decade, but it can’t be overstated what a difference this makes in the overall project.

The guitar, as well as the rest of the deceptively wide instrumental pallet, is made much better by the production work of John Hill. Hill’s somewhat limited discography is quite impressive and he’s especially notable for his ability to mix catchy pop tunes with abrasive and experimental rock elements. This album is no exception as tracks like “Black Madonna,” and “Skin and Bones,” while catchy, incorporate a fairly gritty soundscape.

On the other hand, Social Cues also features a few unique forays into a more psychedelic influences. Tracks like “Love’s the Only Way,” and “What I’m Becoming,” feature entirely different instrumental pallets and are built on slower tempos than the rest of the album. For the most part, these experiments work well, but they suffer for being so wholly separate from the rest of the album. I would’ve liked to see these elements better integrated into other songs.

The record, however, does have a few missteps. Perhaps its worst sin is poor lyricism, embodied by the later cut, “The War is Over,” those it’s certainly not the only track to suffer from this. Most of the lyrics, while not noticeably bad, just don’t say anything and when they do, they’re filled with vague and boring platitudes about love or peace. Of course, most don’t listen to a garage rock record for the lyrical brilliance, but it is a missed opportunity to add to the already impressive sound.

Social Cues’ best quality, however, is best heard in its final two tracks, “Tokyo Smoke,” and “Goodbye.” Though these tracks don’t do anything out of the ordinary from the rest of the album, I found myself amazed by the fact that I was still intently listening by the time I reached these final cut. The excellent pacing across the 13 track, 40 minute runtime makes this an extremely enjoyable listen, and there’s not a skippable track in the bunch. It may not be perfect, but it keeps you listening and entertained throughout, which is all you can ask for.

Social Cues is yet another well executed and perfectly paced set of jams from one of the most consistent acts in the rock genre.