Tool is still one of the best rock bands in the world, without a doubt, and this tour has only further codified their place in rock history. 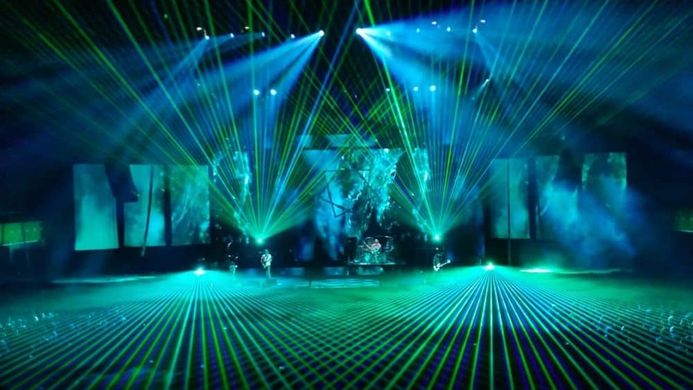 Tool is an alt-rock/prog-metal four piece who rose to popularity in the early 1990’s thanks to their unique sound, bizarre live performances, and a fantastic debut EP called Opiate which came out in 1992. At this time, their sound was heavy, often droning, and far more melodic than the majority of the underground metal in the early nineties. As they progressed, and thanks to the additions of Peach bassist Justin Chancellor and King Crimson producer David Bottrill, Tool took on a more experimental and cutting edge tone which led to massive success and critical acclaim which has continued to this day.

I’ve seen Tool three times, and this was by far the best of the bunch. My first experience came in 2016 at the Chaifetz arena in Saint Louis. It was a smaller tour and Chaifetz is a smaller arena, but the show was fantastic and seeing one of my favorite bands for the first time was a blast. The second came as the headliner and final performance at 2018’s Rock on the Range festival where Tool, though not on tour at the time, brought the house down musically but didn’t quite have the stage set up one would expect from the group. Last night, I saw them for the first time in their peak form, in front of a sold out crowd of about 18,000 roaring fans at the Enterprise Center in St. Louis.

Of course, a giant question looms over any review of a Tool concert in 2019, and so I’ll answer it immediately. Yes, they played new music and it was fantastic. Coming into the show, I’d heard a few shoddy cellphone videos of new tracks like “Descending,” and “Invincible,” but I found myself shocked at the extent to which those videos don’t do these songs justice. The former was brutally heavy, featuring a few of the thickest breakdowns in Tool’s catalog and the latter has an interestingly bright tone and some of the best drum work of Danny Carey’s career. As the intermission before the encore came to an end, the screen went blank and lit back up the word’s “August 30th” written in white, referring to the release date for Tool’s first new LP in 13 years, and having heard these new songs in person, I found myself filled with a brand new excitement like I’ve never felt for an album before.

Beyond new music, all four members of the band gave simply incredible performances on a litany of Tool’s best hits over their long career. They opened with “Aenima,” which was a perfectly heavy way to kick off the show. Maynard’s cleaner vocal sounded excellent on tracks like “The Pot,” and his screams were gravelly and powerful. Adam Jones’ guitar work on songs like “Jambi,” was thick and impressively fast-handed.

The stars of the night, however, were certainly the drums and bass. Justin Chancellor’s bass line on “Schism,” was as excellent as ever, and throughout the show, he was an absolute ball of energy, swinging his hips like an ape and playing with a deep, rich tone that seemed to shake the walls of the entire arena.

Just behind him, Danny Carey helmed a massive drum kit and proved once again that he is one of the best drummers of all time. From his complex rhythms on “Forty Six & 2” to his explosive playing on “Vicarious,” and “Intolerance,” his playing commanded respect and attention for the entirety of the show. The encore began with an extended drum and synth solo from Danny, alone on stage, which was an extremely welcome break in the action to appreciate one of the most talented musicians to ever pick up a set of sticks.

Highlights of the show included a sprawling, expansive performance of “Parabol/Parabola,” early in the set and the ferocious performance of “Stinkfist,” to close the show. These were made that much better by an awe-inspiring light show which included an array of lasers, a lighted, colorful pentagram which moved about in the background, and a multitude of entrancing videos on cranes behind the band, most of which consisted of Tool’s infamously strange music videos.

All in all, this was one of the best live performances I’ve ever seen. Nearly 30 years after their debut, to see Tool returning to form in front of a sold out arena is an exhilarating experience. It’s hard to believe that we’re only about three months away from finally hearing the new album and this show left me more excited than ever.

Tool is still one of the best rock bands in the world, without a doubt, and this tour has only further codified their place in rock history.