SHE IS COMING is a half-baked, hot mess that is fluctuates between boringly safe and confoundingly awful. 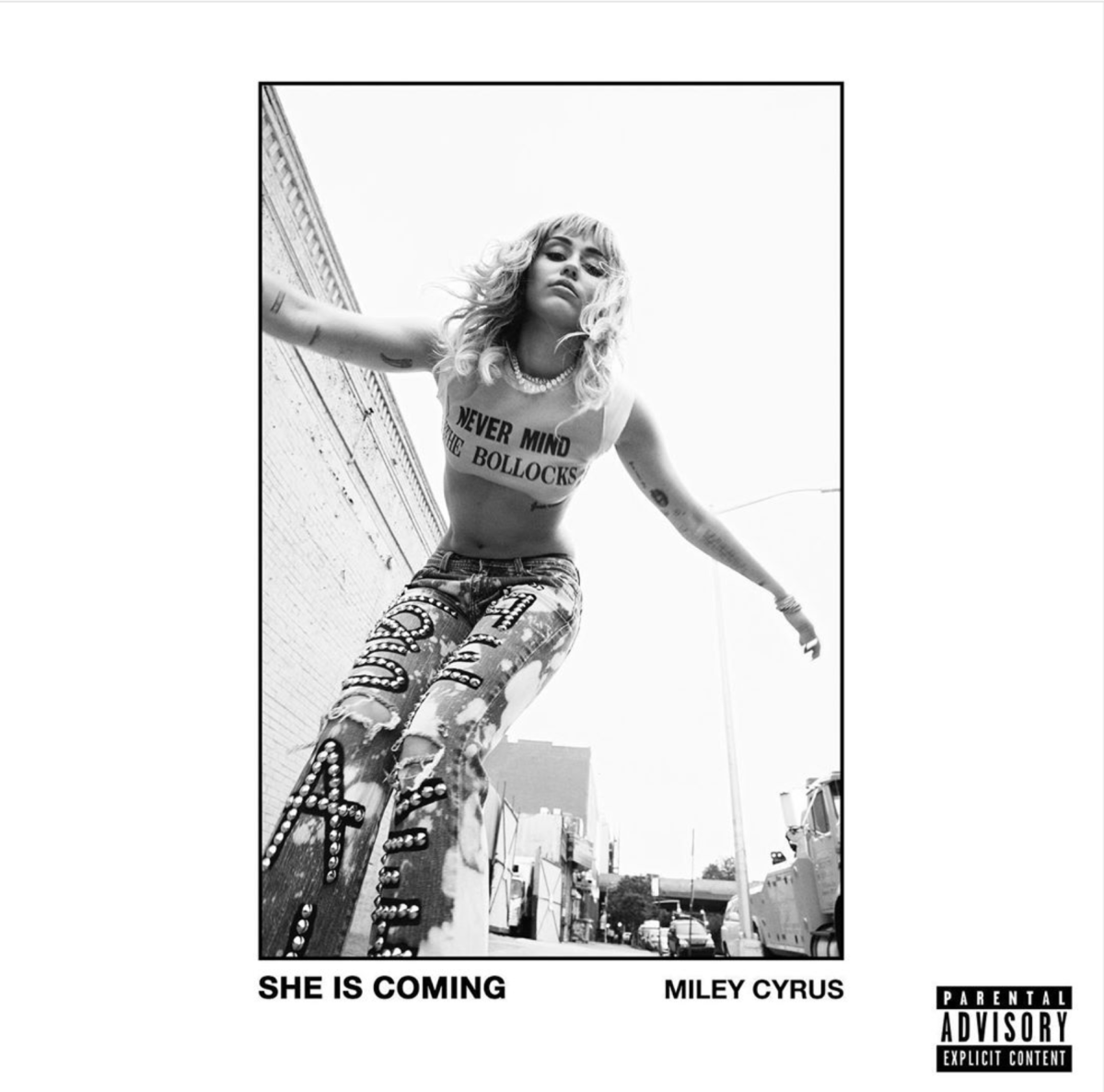 Miley Cyrus is country/pop singer from Nashville, Tennessee. She rose to massive fame as the most prominent figure in Disney’s mid-2000’s class of musical stars. Under the Hannah Montana moniker, she released five LPs full of relatively inoffensive pop music alongside three fairly similar releases under the Miley Cyrus name. Having released five albums by the age of 18, Miley seemed to feel a bit boxed in as the character she’d played on Disney Channel. She quite admirably broke this box with her 2013, triple platinum album, Bangerz, which was vulgar and daring, if a bit meandering. This was followed by the horrendously bloated Miley Cyrus and Her Dead Petz which received a limited release and her much tamer, full scale follow up, Younger Now in 2017. While Miley’s recent work has been commendable in its effort to push boundaries and change her public image, it’s largely felt aimless and thoughtless and virtually never takes advantage of her genuinely impressive vocal abilities. SHE IS COMING is no exception.

The EP opens with “Mother’s Daughter,” which is perhaps the only listenable cut on the tracklist. The trap drums play quite well against the spacey, piano-driven instrumental and Miley’s vocal performance is actually quite strong. The vocal tuning is entirely over the top and the lyrics are atrocious, but the hook is somewhat singable and Miley seems closer to a middle ground between her pop sensibilities and edgy desires than she has in the past.

“Unholy,” follows and a few of the issues with this project start to become apparent fairly quickly. The change in producers from track to track robs it of any possible coherence and Miley’s breathy, hissing vocal is extremely overproduced. The trap drums entirely overpower every melodic element, though none of them are interesting enough to warrant being pushed to the front of the mix. Worst of all, the lyrics on this cut are just awful, and the entire song sounds completely half baked, as does much of the EP.

“D.R.E.A.M.,” falls in the middle of the project and is one of the most disjointed messes of a song I’ve ever heard. While the chorus is admittedly catchy, Miley’s voice is once again breathy and overproduced as she sings over a hokey piano line which could fit comfortably on a High School Musical soundtrack. The only possible saving grace for the track would seem to be the feature from Wu-Tang alum, Ghostface Killah, but instead he phones in a short, unrelated verse on a completely different instrumental which only takes up that 20 or so seconds.

“Cattitude,” is the forth track on the EP and an absolute dumpster fire in musical form. Every single element, from the bizarre and endless RuPaul feature, to Miley’s embarrassing attempt at rapping on the verses, to the horribly vulgar lyrics is simply unlistenable. I can’t fathom how anyone let this song leave the studio’s doors but luckily for the listeners, it seams to be the rock bottom for the record.

“Party Up The Street,” sees Mike Will Made-It taking over production duties for the only well produced song on the tracklist. Swae Lee’s feature is flat throughout the entire track and the instrumentation is boring and uninventive, but a few of the melodies are genuinely well-written and it seems to be the only cut that anyone actually cared about. It serves as a welcome switch up from the aggressively terrible tracks that precede it.

The project closes with “The Most,” which is fairly inoffensive, though it offers little by way of intriguing ideas. The chorus is fairly well-written and features some of the only passible lyrics on the EP and Miley finally gives an impressive vocal performance, which has been lacking from every song thus far. That being said, its still quite overproduced and uninventive and features an irritatingly nondescript synth lead covering the majority of the melody.

Ultimately, this EP is a mess. It somehow finds a way to feel lazy and half-baked yet overproduced and soulless at the same time. Miley’s recent career has been full of spinning wheels without a track, but SHE IS COMING is the worst in this regard. I don’t see any audience for this or even a reason for it to exist.

SHE IS COMING is a half-baked, hot mess that is fluctuates between boringly safe and confoundingly awful.