Here’s my annual attempt at writing about something other than music!! 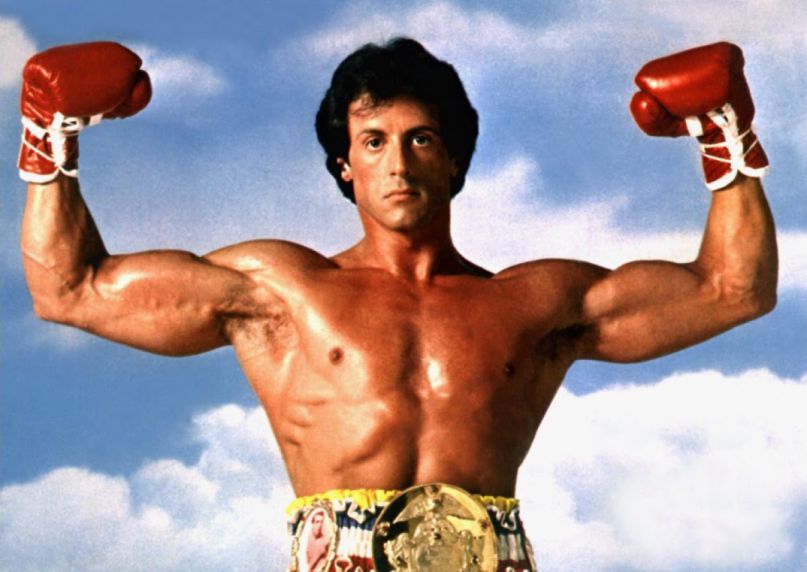 Easily the most derided of of the original series, it’s often said that Rocky V is without a redeeming quality. That’s not true. In fact, the bulk of Rocky V is excellent. Rocky’s transition to the role of trainer, even taking over Mighty Mick’s, and Tommy Gunn is an interesting character who mirrors Rocky in so many ways that when he makes mistakes that Rocky wouldn’t, it carries weight. Above all, Rocky’s arc of learning to give up fighting and finally accept that he has everything he needs was a nice set up, though unfortunately, it’s never realized.

Rocky V falls down hard in several key areas, though. Firstly, the score is almost unlistenable. Even Rocky IV’s cocaine fueled extravaganza of a soundtrack had a ton of listenable moments, but V’s hip-hop influences are just strange and out of place. Additionally, Rocky’s issues with his son are never adequately resolved. The worst offense, however, is the much maligned street fight in the final act. In the end, they just couldn’t quite pull the trigger on a Rocky film that didn’t end with Rocky fighting, and because of this, the finish feels completely unbelievable and not satisfying. There’s no such thing as a bad Rocky movie, but Rocky V is the only one that feels lost.

I may be at a disagreement with many longtime fans here, and honestly, I was surprised myself upon rewatching the series, how low this film landed. To be clear, there are sections of this movie that can stand toe to toe with any classic Rocky moment. Micky’s death is absolutely gut-wrenching and beautifully acted, casting Clubber Lang as the hungry up and comer against Rocky’s over confidence was a smart choice, and the infamous scenes of Rocky learning to dance in training and eventually defeating Apollo Creed in a slow motion foot race on the beach while wearing the most 1980’s crop top tee ever worn on film. In fact, III’s best legacy is further developing Apollo as a main character and friend of Rocky.

However, the film ultimately falls down in two key areas. The first of these is the villain. Mr. T’s Clubber Lang simply doesn’t receive the development he needs. He seems to be a beta form of Rocky IV’s Ivan Drago, and doesn’t achieve nearly the level of intimidation  and hopelessness brought on Drago. It takes a total of three rounds and a slight improvement in Rocky’s speed and footwork to absolutely annihilate Lang. Ultimately, though, and this is the film’s worst sin, Rocky III falls in the valley between the grounded, underdog story of I and II, and the 80’s indulgence of IV and parts of V. The result is a film with iconic moments, but a somewhat weak overall arc.

One of the more controversial films in the series, Rocky Balboa is the first to bring Rocky into the 21st century, and it does so in a uniquely effective way. It grounds the series in reality far more than the excesses of the latter portion of the original run. The best element, though, is the creative inclusion of minor and side characters from the Rocky universe as larger figures in this installment. Spider Silva, Rocky’s opponent in the first scene of the first film becomes a friend of the boxer who often eats at his restaurant and Marie, a young girl with whom Rocky shared a quick life lesson in the first film, is once again mentored by Rocky, this time as the main female counterpart to Sylvester Stallone. The highlight comes in the final fight which stands as one of the series’ most heartwarming finishes.

Despite all this, the film is rarely sited as a fan favorite because it’s brutally depressing. It opens on Rocky sitting at his late wife’s grave, kicking off a first act which deals largely with Adrian’s death and Balboa’s estrangement from his son. There are a few moments where the emotions are laid on a bit thick, but in most instances, Stalone’s writing is nearly as impressive as the first script, and it’s the last of the series in which he had significant creative input. Ultimately, Rocky Balboa is a starkly beautiful tribute to the classic characters and story that radiates love for Rocky universe, but its dark tone and stand alone nature makes it feel somewhat obligatory upon repeated viewings.

Nearly a decade after Rocky Balboa seemingly closed the books the universe, Creed breathed new life into this franchise. Most importantly, Sylvester Stallone takes on a supporting role for the first time in the series, making way for Michael B. Jordan’s Adonis Creed. The film follows the script of the first Rocky in many ways, and where it doesn’t, it makes massive meaning in its differences.

Bianca is a tough, independent woman, contrasting to Adriane’s timidity, and she’s one of the best characters in the series. Best of all, Creed comes from money and bares the name of a legend, as apposed to Rocky’s story of coming from nothing. It’s a testament to the fighter’s spirit as he works to erase his name and his father’s legacy. Rocky’s battle with cancer is a great parallel to Adonis’ battle in the ring and, in the end, the Rocky franchise finally feels alive in a way it hasn’t for many years.

If ever one needed proof that cocaine was extremely prevalent in the 80’s, there’s Rocky IV. Featuring not one, not two, but four montages, all set to the most purely 1980’s songs ever written, this film is a blast. Dolph Lundgren is positively terrifying as Ivan Drago, the final montage is the best of the series, and the final fight is perfectly epic. At the emotional core of Rocky IV is the gut wrenching death of Apollo Creed, which is handled quite well, considering the generally over-the-top tone of the movie as a whole.

Rocky IV isn’t perfect by any means. Strictly speaking, in terms of pure film making, it’s hard to even call it “good.” There’s hardly 30 minutes worth of storyline, fluffed out by style over substance, the patriotic commentary on the Cold War borders on propagandistic, and Rocky’s speech following his victory hasn’t aged well in the slightest. However, for fans of this universe, Rocky IV is infinitely watchable. It’s the high point of the saga’s latter years and it’s so memorable that it gets something of a direct sequel in the film ranked just above it.

The eighth and latest edition to the franchise, Creed II lands immediately in the upper echelons of Rocky movies as the best entry in almost 40 years. The relationship arc between Adonis and Bianca is excellent, Vitor Drago, son of Ivan, is nearly as intimidating as his father, helped by the fear Rocky shows upon hearing the challenge, and the sound track is, yet again, perfect. The reason this film lands so high, though, is its very pure focus on themes.

The story focusses squarely on fatherhood. As Adonis is forced to confront the man who took his father from him, he also becomes a father himself, dealing with the revelation that his son, like Bianca, is deaf. This comes to a head in the finale as Rocky finally speaks with his estranged son and meets his grandson for the first time. Most importantly, Creed II sees Sylvester Stallone finally say goodbye to the character of Rocky, having seen Adonis defeat Drago and rectifying his great mistake, we get a heartfelt farewell to an American icon.

It is beyond difficult to rank this below any other, as it is one of the most perfect films in cinema history. The ultimate underdog story, Stallone’s Rocky is a lovable tough who gets the opportunity of a lifetime to fight the world heavyweight champion, Apollo Creed. Micky’s rough exterior and good heart makes him an instant fan favorite, Paulie is hilariously sleazy, and Rocky’s love story with Adriane is one for the ages.

The key to this movie is the very simple heartfelt script. The way Rocky is treated as a “sure thing” by Creed and Rocky’s determination to make something of himself is impossible not to feel. When the fight finally happens, every single punch seems to land directly on your own body, and no one with a soul can help but feel their heart warm when Rocky makes it through all 12 rounds. It can’t be overstated what an amazing movie this is, and it spawned one of the longest, most consistent sagas in history.

This film is incredible. Following the explosive success of the original, Rocky II seemed to face an insurmountable obstacle in following up. What Stallone cooked up is a similar script, packed full of iconic moments and fantastic characters. Adriane is a far more developed, as is the relationship between Rocky and Micky. We see Rocky struggle with the fame gained from his fight and Apollo’s near constant berating in the effort to draw him out retirement.

When he decides to take the rematch, its much different this time as there is a distinct chance that Rocky could actually win the fight, and Adriane’s sickness is a fantastic emotional center. Most importantly, Rocky II establishes the formula which would characterize the nearly all of the sequels that would follow. A villain brings Rocky out of retirement, Rocky trains poorly, tragedy strikes, Rocky finds the strength to train again, this time with vigor, and he finally wins the fight and rectifies the tragedy of the low point. Rocky may have introduced the characters, but it was Rocky II that invented the formula which all subsequent entries would follow, and of course, who can forget the films closing line, “Yo, Adriane! I did it!”