Nine is an unfortunate and out of touch entry into a once legendary catalog. 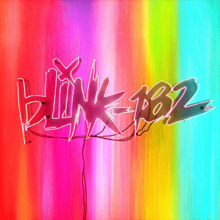 Blink-182 is a pop/punk three-piece from Poway, California. Their debut, Cheshire Cat in 1995 and it’s follow up, Dude Ranch found significant success with the latter going platinum, but it was their 1999 classic, Enema of the State which placed the band at the very top of the rising pop/punk wave and remains to this day one of the most iconic rock albums of the late 90’s. The success continued through the turn of the century as 2001’s Take Off Your Pants and Jacket and 2003’s self-titled LP sold over three million copies combined and solidified Blink’s legend status, despite the drop in quality as they turned from goofy, immature comedy to weak attempts at thoughtful lyricism. Since this successful trio, the band broke an eight year silence with 2011’s  Neighborhoods and another five year break with 2016’s California. Both records received middling reviews and commercial success. Now, they’ve returned with Nine.

The problems with this album are fairly apparent from the first track, “The First Time,” as Mark Hoppus struggles in vain to keep up, vocally, with the rest of the band. That carefree, whining lead that brought such a comedic layer to the band’s sound is just gone as cuts like “Hungover You,” sound completely out of touch.

Lyrically, the record also leaves quite a bit to be desired as well. Blink hasn’t had the juvenile edge in many years, but this album is especially bland. Tracks like “Happy Days,” and “On Some Emo Shit,” verge on meaningless and lack any of the snarky wit that fans have come to expect. There is genuinely not a single memorable line on the LP, and the pacing suffers greatly for it.

In fairness, there are a handful of interesting tracks. Travis Barker’s drumming is, as always, a highlight as cuts like “Pin the Grenade,” and “No Heart to Speak Of,” which make the second half of the record somewhat bearable, and “Blame It On My Youth,” which is maybe the most exciting track on the LP, hinge almost entirely on Barker’s lightning fast fills and creative rhythms. These are some of the few moments when the magic of the old Blink seems to be alive, but they’re quickly snuffed out.

The drums are often dragged down by atrocious production. Tracks like “Heaven,” and “Darkside,” are some of the worst as the vocals hiss almost to a painful extent and the drums and guitars are often soaked in an ill-advised comb-filter effect which makes them sound like they’re coming from a playstation game.

Additionally, the instrumentals themselves are often boring and uninspired. Cuts like “Run Away,” and the closer, “Remember to Forget Me,” feature almost nothing of note and feel almost like musical wallpaper. The mixture of lazy songwriting and repetitive arrangement seriously hurts the pacing and leaves none of the tracks with any lasting impact.

Some of the best tracks on the album are the two, “Generational Divide,” and “Ransom,” which come in with a runtime under 90 seconds. Oddly enough, this shorter format seems to ignite some songwriting fire in the band as Barker’s drums and even some of the vocal hooks are punchy and exciting. These tracks don’t overstay their welcome and, though the entire album couldn’t be made up of cuts like this, they’re some of the only exciting moments across the bloated runtime.

Perhaps the worst tracks on the album, though, fall in the middle where the band just seems to be desperately searching for a sound. “Black Rain,” sees a more metal approach with heavier instrumentation while “I Really Wish I Hated You,” attempts to use sharp vocal melodies and witty lyricism to tell a story. Unfortunately, both fail, not for lack of trying, but because the band is just far too stiff and out of touch to pull off these new sounds. At best, these tracks sound like an older band having fun trying out some new styles, and at worst they sound like cheap mimicry of the dynamism that made them legends in the first place. Add in the constant trap drums and hip-hop instrumental elements, and you have a recipe for a very out of touch LP.

Ultimately, I don’t know that I can call this album a disappointment. I haven’t cared much for anything Blink has done since their heyday in the late 90’s and early 2000’s. But this album is especially frustrating for a number of reasons. The bloated runtime and lack of creativity certainly spring to mind, but most of all, I have to wonder as to the purpose of the album in the first place. None of these tracks appear to have been worked on all that much and if you don’t feel like working hard on new music, why put out a new record at all?

Nine is an unfortunate and out of touch entry into a once legendary catalog.