While the record is flawed, it’s a passionate attempt to balance loud, thrashing instruments with virtuosity and precision which, when it works, works gloriously. 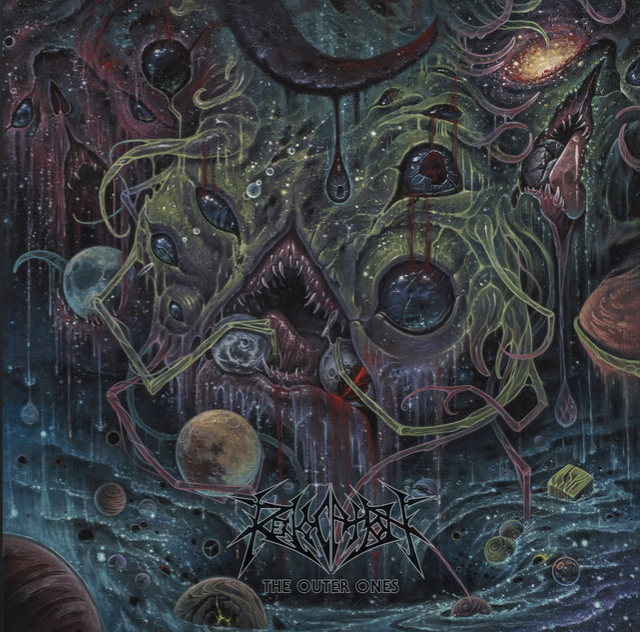 Revocation is a thrash/death metal trio based in Boston, MA. They founded nearly two decades ago and quickly gained notoriety from a very strong, self-released EP and a follow up LP in 2006 and 2008 respectively. After signing with Relapse Records in 2009, the group went on to release three very successful projects, the last of which, 2013’s self-titled album, actually charted in the billboard 200. Recently, they’ve signed to Metal Blade Records for 2014’s Deathless and 2016’s Great Is Our Sin, each of which charted and received heavy critical acclaim in the US and parts of Europe.

The groups is known, first and foremost, for their technical abilities on each instrument and attention to detail in every riff and fill. This serves them well in a genre which caters to fans with a strong knowledge of musicianship and provides a window in for listeners from outside the genre who don’t necessarily know what to listen for in heavy metal. They’ve gone through a few lineup changes over the years, with frontman David Davidson remaining as the only member of the original cast, but they haven’t lost any of their edge or skill. With that, let’s take a look at The Outer Ones.

The backbone and workhorse of this group is Ash Pearson on drums. Having just joined in 2015 to replace longtime and founding member, Phil Dubois-Coyne, Pearson stepped into big shoes, which he filled instantly. His ability to switch from complex groves to ridiculously fast, driving passages is extremely impressive. This shines a lot on tracks like “That Which Consumes All Things,” or “Fathomless Catacombs,” but it is the spine of the record as a whole and allows Revocation to put clear separations between their thrash and death metal influences.

While the drums may be the bedrock, you could be forgiven for missing much of Pearson’s work thanks the distraction of David Davidson’s soaring lead guitars. The solo on the opener and my favorite cut, “Of Unworldly Origins,” just cuts the very dense mix in half with power and direction and the way he toys with atonation and dissonance on the opening of the title track gives an eery feel which is far too rare on this record. This, of course, not to mention the lead only passage on the closer, “A Starless Darkness,” which is simply fantastic.

The rhythm guitar is excellent is as well. Davidson’s tone and chunky play works well over the drums to enforce the rhythm well on tracks like “Vanitas.” Throughout the entire album, this guitar is an essential part of pulling listeners along for the constantly changing rhythms and tempos that The Outer Ones throws at them.

Vocals are a much weaker area as Davidson is a much better guitarist than vocalist. While he has high points like “Luciferous,” where his more thrashing voice comes through to imbue the track with a certain epical feel, most of his performances aren’t memorable, and tend leave listeners waiting for the next virtuosic instrumental passage.

The bass guitar is very nearly non-existent on this project. Brett Bamburger’s work peaks its head out in tracks like “Luciferous,” or “Vanitas” but weather its buried in the mix or just forgettable and unnoticeable, the bass can hardly be heard outside of these few spotlighting moments. Because of this, every single track is wanting of a depth which just doesn’t come from the rest of the rather narrow instrumental pallet.

Easily the album’s worst quality, though, is the production. Accomplished metal producer, Zeuss takes the reigns on The Outer Ones and paints this record with more than a few cliched choices. The swirling fade in on “Blood Atonement,” is extremely overused and dated and the fade out on “A Starless Darkness,” is simply unforgivable and all but ruins one of Revocation’s strongest pieces in the tracklist. Beyond this, the entire project has a very thin sound, the bass guitars are buried through much of it, and what stereo imaging there is comes off as gimmicky and unnatural. This seems to be simply a case of trying to fix what isn’t broke.

All together, The Outer Ones is a fun, heavy release from one of the most talented groups in rock music. The less than 50 minute runtime doesn’t overstay its welcome, tracks are well paced and consistently entertaining, and the musicianship is nothing short of fantastic.

While the record is flawed, it’s a passionate attempt to balance loud, thrashing instruments with virtuosity and precision which, when it works, works gloriously.

HEAR THE OUTER ONES: https://open.spotify.com/album/1Ela7sSi5MIp9HmEuLbCdY