827 Miles is an incredibly listenable debut which has me excited to cover many more releases from Veronica Stanton. 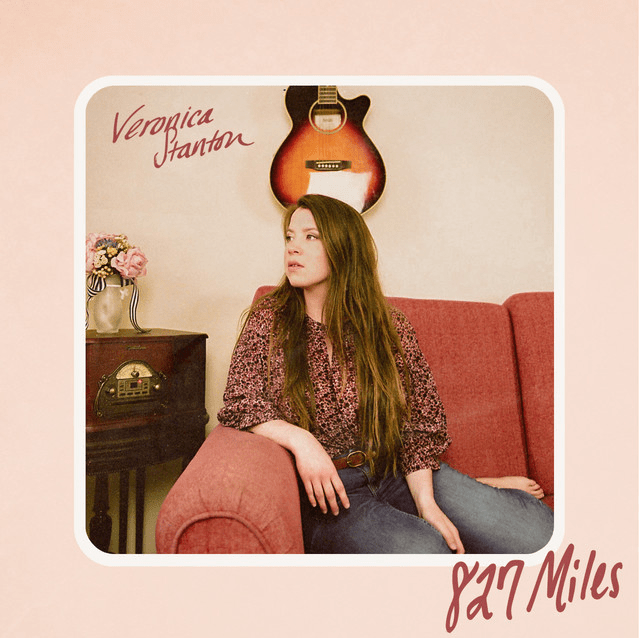 Veronica Stanton is a country singer/songwriter from Jenkintown, PA and based in Nashville, TN. She got her start in local shows performing with a family band and learned sing and play music at home. She stepped out into more solo work in high school and began to pursue songwriting in earnest in college. After graduating, she came to Nashville and began playing the circuit of writers rounds before starting to work with producer Dan Knobler. Now, she’s released her debut EP, 827 Miles, named for the distance from her hometown to Nashville.

The project opens with the title track and immediately, much of what makes this EP special is present. Veronica’s sweet, bright vocal is easily the highlight of the cut, made all the better by some clever and well-written lyrics. Her rhyme schemes create instant earworms that demand a second listen and, thanks to nice, clean production, the her personality bubbles through every line. Songs that focus on missing home are also less prominent than they once were and it’s nice to hear the topic addressed so well once again.

“Flying,” follows and quickly, the strong instrumentation begins to shine through. Anthony DaCosta helms the electric guitar, which he did quite well on Joy Williams’ album which I covered earlier this week. His gentle touch and ear for melody are invaluable to this cut and many after. Beyond this, the verse-centric structure with a two bar chorus is unique and Stanton confidently channels shades of Dolly Parton in her soft but solid delivery. It’s yet another track which seems to demand a second listen.

“Wildflower,” falls perfectly in the middle of the five tracks and fills this position incredibly well. It’s far more lighthearted, lyrically, and the vocal melody on the chorus is nothing short of fantastic. Dan Knobler’s production is almost a sugar rush of bright guitars and a well placed organ that creates a beautifully shimmering piece of pop-country. As if this wasn’t enough, Veronica proves the legitimacy of her old school aesthetic with an awesome key change in the final third that perfectly closes out the funnest track on the project.

As “Rome,” rolls around, the organ takes the front seat, as do the drums for the first time. The changes quickly set the song apart from previous entries, but the great vocals, fun lyrics, and melodic lead guitar is no less present. In fact, the chorus may be the best of the EP and Stanton’s falsettos are an interesting touch which I wish had better utilized on each track. Overall, while “Rome,” doesn’t jump out the way earlier cuts do, it’s certainly one of the strongest of the bunch.

“Won’t Be Back Soon,” brings the project to a close and the roaring electric guitar on the intro quickly establishes the track’s irreverence. This is easily the lyrical highlight of the album as she turns the classic trope of promising a quick return to home on its head by pointing out that, for her to come back would mean failure in her dreams. The brilliant touch of storytelling is just icing on the cake of one more fantastic instrumental, complete with a rocking organ solo. “Won’t Be Back Soon,” is a perfect closer and brings the theme of the EP full circle.

Ultimately, I’m left without much to complain about. Each track is perfectly paced, well mixed, and well written. The theme is cohesive but not overbearing and Veronica’s voice is wonderfully at home in this modernized version of golden age, women’s country.

827 Miles is an incredibly listenable debut which has me excited to cover many more releases from Veronica Stanton.

Wasteland, Baby! Is an infectious passion project from one of the brightest minds in music today which slowly sucks you in further and further in with each listen.

Hozier is an indie/blues rock artist from Bray, Ireland. He debuted in 2013 with the Take Me to Church EP, the title track of which is still his most successful song to date, certified eight times platinum in the US alone. After the massive success, he went on to drop the From Eden EP, which was equally well received and left expectations sky high for an upcoming LP. His 2014 self-titled album debut certainly didn’t disappoint, featuring represses of much of the previous two releases while adding a few fantastic new cuts. The album went double platinum in the US and six times platinum in his home country of Ireland, spawning a large tour and and netting multiple awards. Fans were left clamoring for more but were largely met with silence until the release of the Nina Cried Power EP in late 2018. Now, just a few months later, we finally have a sophomore effort from the indie rock troubadour and it absolutely does not disappoint.

Wasteland, Baby! May be a bit jarring to fans of the debut, as was the preceding EP, as Hozier has returned with a wide array of new styles and effects, and a renewed focus on the instrumental side of his music which just didn’t exist before. This is made obvious in the baselines of the very opening track, “Nina Cried Power,” in addition to “No Plan,” a few cuts later. The bass guitar works extremely hard across this record, constantly moving with purpose and played with skill.

This is also extremely noticeable in the massive instrumental pallet of this album. The violins on “As It Was” lend a gravitas to an already fantastic, folk-inspired song, while the organ  work on “Be,” and across the majority of the latter half of the record is a wonderful touch. While the first album seemed a bit more consistent in terms of tone, I much prefer the expansive pallet and exciting nature of Wasteland, Baby!

Without a doubt, however, the most noticeable change is a massive focus on percussion on nearly every track. While a song like “Movement,” or “Sunlight,” is perhaps a bit more noticeable, it’s clear that Hozier put serious time and effort into each piece of the percussion on this album and it absolutely pays off. Never once do we hear a nondescript rock beat but in stead a minimalistic but effective collections of dynamic sounds keeping the rhythm.

All this being said, the best qualities of the album are still, by far, the elements we’ve come to expect and appreciate from Hozier’s work. The guitar work is wonderful. From the rolling, picked acoustic of “To Noise Making,” to the earworm riffs of tracks like “Talk,” and “Dinner & Diatribes.” His guitar is at the center of nearly every track and that’s never a bad thing.

The lyrics on this album are nothing short of poetry. “Almost,” is a wonderfully fun tribute to love and music using several lyrics from timeless the jazz standards of acts like Sinatra and Jelly Roll Morton. “Shrike,” on the other hand is breathtaking ode to a love lost using nature as a perfect metaphor. It’s also the best track on the album and one of the best tracks I’ve heard in a very long time. The closer and title track uses powerful apocalyptic imagery to describe the act of falling in love in yet another stroke of brilliance. Genuinely every track on this album stems from a wonderful lyrical idea and executed nearly perfectly.

The absolute, undeniable highlight on this album, however, comes in Hozier’s vocals. Whether it’s the Motown and soul inspired sound of a track like “Nobody,” or the booming, blues rock of “Would That I,” or any of the other 12 cuts on this album, Hozier’s voice is a constant presence. It’s soft and contemplative when it needs to be, and smoothly powerful at the perfect moments, and it is, overall, an absolute Iron Man effort from an incredible talent.

As this album wraps up, I’m struck by what a fantastic experience it was. The pacing is near perfect, never leaving me bored over a nearly hour long runtime, every song feels essential and unique, and every risk taken on the album pays off in full. Even the singles I didn’t love in the lead up have found a comfortable home on this record and have become some of my favorite cuts. The massive accomplishment that is this LP becomes even more incredible when you realize that each and every track is written, largely performed, and produced by Hozier himself.

Wasteland, Baby! Is an infectious passion project from one of the brightest minds in music today which slowly sucks you in further and further in with each listen. It’s an instant classic and it’s the second album in Brendon’s Beats history to receive a perfect score.